The Real History of Fish and Chips

16 Mar The Real History of Fish and Chips

Most people think that Fish and Chips originated in England, this is not actually true. The real history of Fish and Chips is traced back to 15th Century Portugal where the dish really was invented. Like so many other famous dishes, fish and chips was created out of necessity, not culinary genius.

Read on to hear the whole history of fish and chips and how it became an English staple!

Just a little pun. But did you know that the first Friday in June every year is National Fish & Chips Day? This year (2021) it will be celebrated on June 4. Here at Skull Creek Dockside we serve a classic rendition of the dish and thought it would be fun to investigate the origins of what we believed was a classic British dish. Well, we were a little surprised with what we found out and we think you will be too.

The pairing of fish and chips has long been considered a British staple. The irresistible combination of a hunk of battered cod resting atop a mound of steaming hot chips (french fries in America) is the quintessential British comfort food. Whether eaten on a plastic tray on your lap in front of the “telly” or gobbled down from a makeshift paper cone on the way home from the pub, a meal of fish and chips is like a serving of deep fried nostalgia in the UK – and let’s not forget a sprinkling of salt and vinegar.

At the dish’s peak of popularity in the late 1920s, there were 35,000 fish and chips shops in the United Kingdom (England, Scotland, Wales, and Northern Ireland). Today, there are still 10,500 “chippies” in the U.K. serving 360 million meals of fish and chips every year. That’s the equivalent of six servings of fish and chips to every British man, woman, and child.

The golden fried combo is so deeply entrenched in British culture that it can be hard to imagine a time when there wasn’t a fish and chip shop in every neighborhood. But travel back a mere 200 years and you would be hard pressed to find a combination of fried fish and chipped potatoes anywhere in the British Isles. Yes, the origin story of fish and chips is a bit more complex than the nationalist sentiment might imply.

Food history tells us that it all began outside the U.K hundreds of years ago. From the 8th to the 12th centuries, Jews, Muslims, and Christians lived in relative peace in Portugal, known as Al-Andalus, under Moorish rule. Sephardic Jews, who likely comprised 20 percent of the population, held positions in the high court. But the strength of Moorish rule diminished over time as Christian armies started conquering the territory. By 1249, Moorish rule ended in Portugal 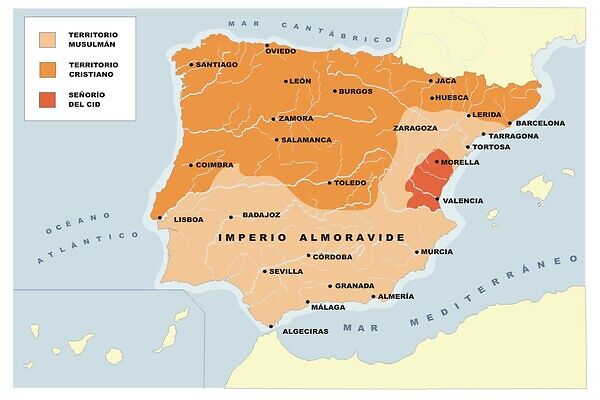 The situation changed dramatically in the 15th century. First, the Spanish Inquisition outlawed Judaism, sending Spanish Jews fleeing to neighboring Portugal. Then in 1496, the Portuguese King Manuel I married Isabella of Spain who was not on board with religious freedom. She insisted on the expulsion of all Jews from Portugal. Manuel I mandated that all Jews be baptized or otherwise be expelled.

While many fled, some Jews stayed and either converted to Christianity or pretended to do so while continuing to practice Judaism in secret. But when Portugal fell under Spanish rule, the Inquisition targeted individuals with Jewish lineage threatening anyone claiming to be a “converso.” As religious violence worsened, many chose to flee to other parts of Europe with large numbers settling in England. As with many cultures, wherever the Sephardic Jews traveled they brought their rich culinary traditions.

Cooking is not allowed on the Jewish Sabbath (Shabbat) which begins on sundown Friday night and ends on sundown Saturday. So Sephardic Jewish families would prepare food on Friday afternoon that would last the next 24 hours. One of those dishes was a white fish, typically cod or haddock, fried in a thin coat of flour or matzo meal. The batter preserved the fish so it could be eaten cold and without sacrificing too much flavor for the next day.

It was a hit. Soon, Jewish immigrants to England took to selling fried fish in the streets from trays hung from their necks by leather straps. As early as 1781, a British cookbook refers to “the Jews’ way of preserving all sorts of fish,” and Thomas Jefferson, after a visit to England, wrote about sampling “fried fish in the Jewish fashion.” 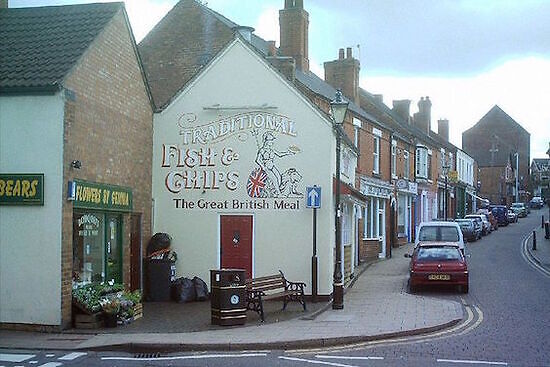 In his London based novel Oliver Twist (1837), Charles Dickens refers to “fried fish warehouses,” the forerunner to the modern chippie where bread or baked potato were served alongside the fish.

A little later, in 1845, cook and writer Alenis Soyer in his first edition of A Shilling Cooking for the People gave a recipe for “Fried Fish, Jewish Fashion” which was fish dipped into a batter of flour and water and then fried.

But it wasn’t until the latter part of the 19th century that Jewish fried fish fully made the cultural transfer from the streets of London to the broader British populace. And for that food historians credit two developments. First, the advent of industrial scale trawl fishing in the North Sea meant that inexpensive fish could be transported to all corners of the U.K. by the second development, extensive railroad lines. Fried fish consumption rocketed with these technological advances.

That basically covers the fish bit, but what about the second half of the dish?

Nobody is entirely sure how fried potatoes became a part of the European diet. Food historians do know that it took a really long time for fried potatoes (or potatoes of any kind) to make their way to England.

Belgium stakes a claim as the inventor of fried potatoes. The story goes that in 1680 winter was so cold that the River Meuse (located in present day Belgium) froze over and that the women in the area would turn to cutting potatoes in the shape of fish and frying them in a bit of oil so as to provide sustenance for their families.

Going back to Charles Dickens, he mentions in his 1859 novel A Tale of Two Cities, “husky chips of potato fried with some reluctant drops of oil,” which means that chips had definitely reached England by mid-century. 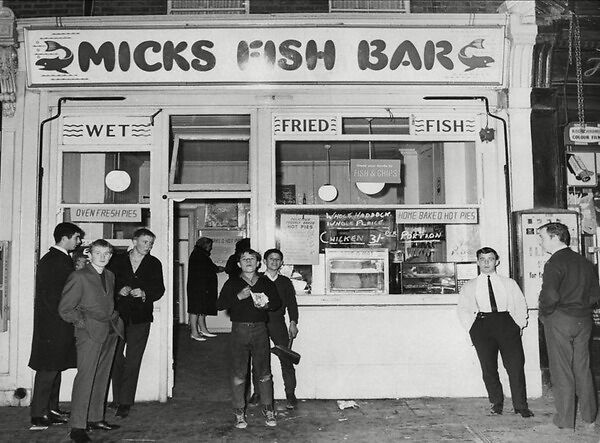 It is difficult to pinpoint the precise arrival of fried potatoes in England, but by 1860 we see the very first fish and chips shops.

As usual with food origins, there are competing claims for being the first British fish and chip shop. Many food historians say that a Jewish cook, a young Ashkenezi immigrant named Joseph Malin, opened the first chippy in 1860 in London. The shop was so successful that it remained in business until the 1970s. And up near Manchester, the fish and chip stand opened by John Lees was doing a brisk business by 1863.

By 1910 there were 25,000 fish and chip shops in the U.K. and they even stayed open during World War I. In an effort to boost morale at home, Prime Minister David Lloyd George made sure that fish and chips stayed off the ration list (eggs, bread, and meat were on the list). The same practice was observed during World War II, when Winston Churchill famously referred to a hot meal of fish and chips as “the good companions.”

According to legend, British soldiers storming the Normandy beaches on D-Day would identify each other by yelling out, “Fish,” and waiting for the barely coded response, “Chips.”

In modern, multicultural U.K., there is plenty of competition for the National dish. In fact, chicken tikka masala makes a strong claim but most food writers, cooks, and chefs still regard fish and chips as a culinary symbol of Britishness.

Some chippy traditions have changed over the years. For example during the war years, paper rations meant that fish and chips were served in cones of yesterday’s newspaper. That practice went out of favor in the 1980s when it was deemed unsafe for food to come in contact with newspaper ink without a greaseproof paper in between. And, traditionally, fish and chips were accompanied by salt and malt vinegar, but younger generations have turned to curry sauce and, heaven forbid, even ketchup.

This is how fish and chips are eaten around the world:

At Skull Creek Dockside we offer a wide array of delicious and mouthwatering food but don’t sleep on our Fish and Chips. Hope to see you soon, and remember, the first Friday in June is National Fish and Chips Day. 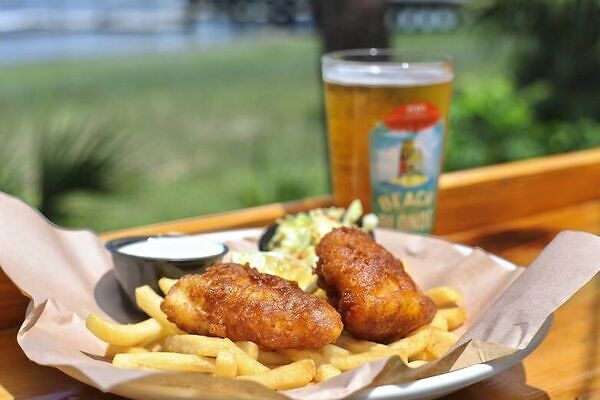 How about a few more puns. New Cod on the Block, For Your Fries Only, and Frying Nemo (our fave).


We use cookies to ensure that we give you the best experience on our website. By continuing to use this site, you give your consent to our use of cookies for analytics, personalization and functionality. OkRead more